When we think of the origin of wine, we usually think of those images of roman and/or greek parties we see in museums all over the world.

Many of them represented by paintings of bacchus or Dionisius, where they are surrounded by grapes and vineyards, in a merry atmosphere and with a common denominator, wine.

If in mythology we already see presence of wine, is logical to think that it has been with us since the beginning of civilization.

For example, wine during the iron age or classical Greece was an element of social standing.

In the case of the Duero river bank, historical data gives us residue of wine during the Vaccea tribe preriod (circa III BCE).

Archeological digs in Pintia, found residues of wine in some amphorae.

Even in tombstones, they have found cerotic acid, opening the possibility to wine sweetened with honey.

Data also shows that wine was considered a luxury item, available only to the elite and/or important celebrations.

All this information tells us that wine, has been and will always be a link for social relationships.

Carlos Sanz, Archeologist from the University of Valladolid says “Wine was and is an elixir that feeds and joins human beings”. 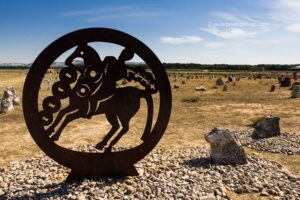 He adds, “always as a symbol of sharing, creating friendships and cultures”. If you want to enjoy it and have a good time close to Pintia, come visit us!