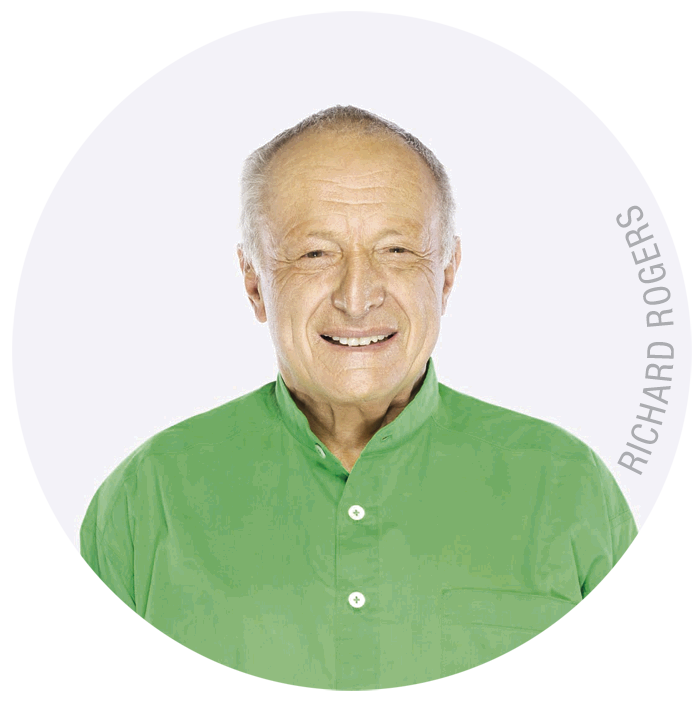 The new Protos winery facility is located at an interesting historical crossroads: the extension of the Camino de las Eras and the San Pedro sheep drove road an ancient Roman road. It is on the edge of a low-lying area that, in the past, was partially covered by a small pond fed by waters from the nearby Botijas stream. It is also located quite near the aging winery, connected to them via an underground link, and buried underneath the Peñafiel Castle. 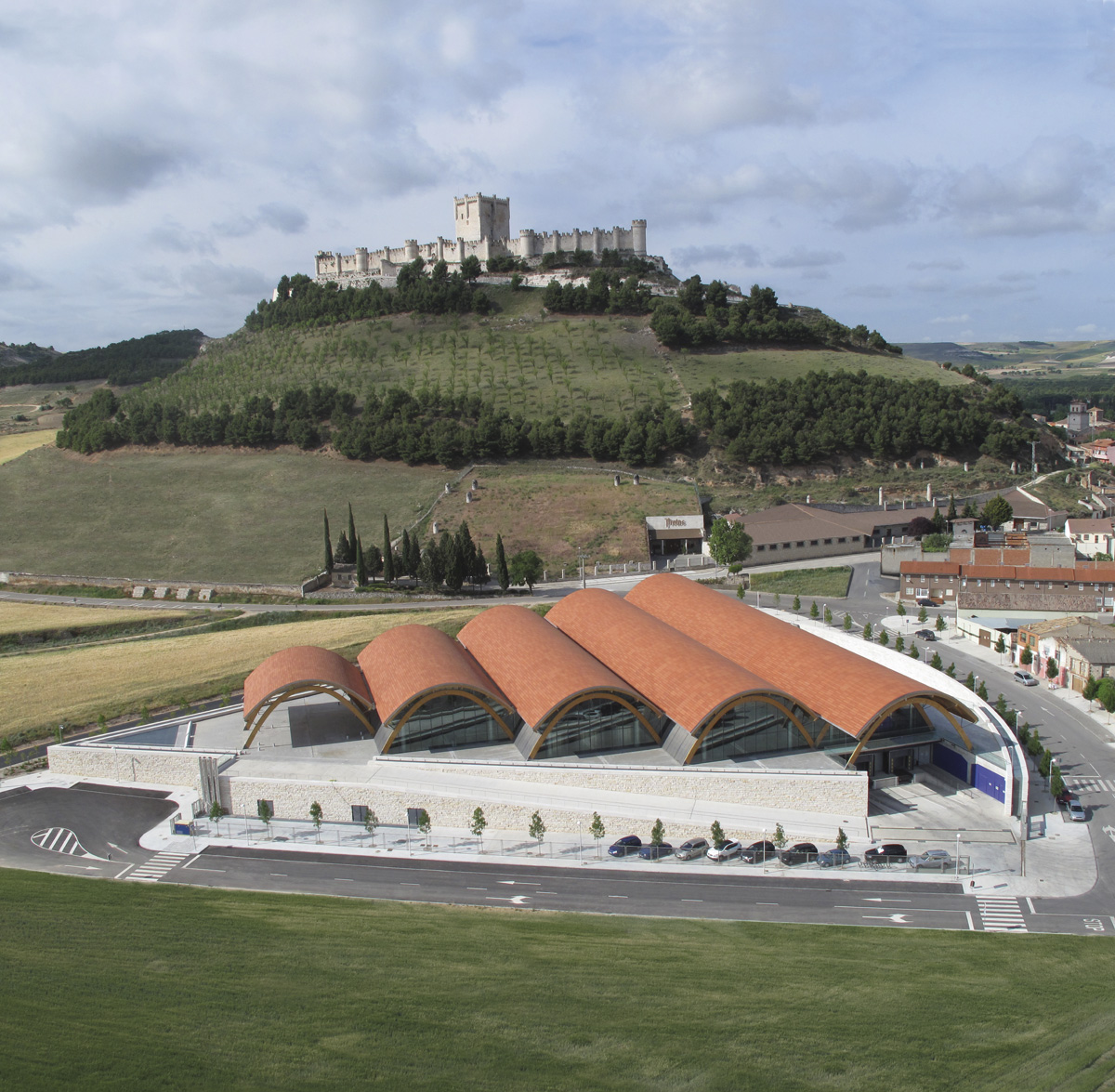 On the other hand, the aboveground structure, technically known as the “light structure”, is a reinterpretation of vault-shaped winery construction methods. This structure is made of parabolic arches of laminated wood. The shape and materials were chosen because they are structurally efficient and appropriate for the production process, as traditional winery construction has taught us.

With this reference in mind, and for practical reasons that are commonplace to vernacular architecture in relation to making the best use of the lower temperatures underground, most of the facilities used in the preparation and aging of wine are buried underground. 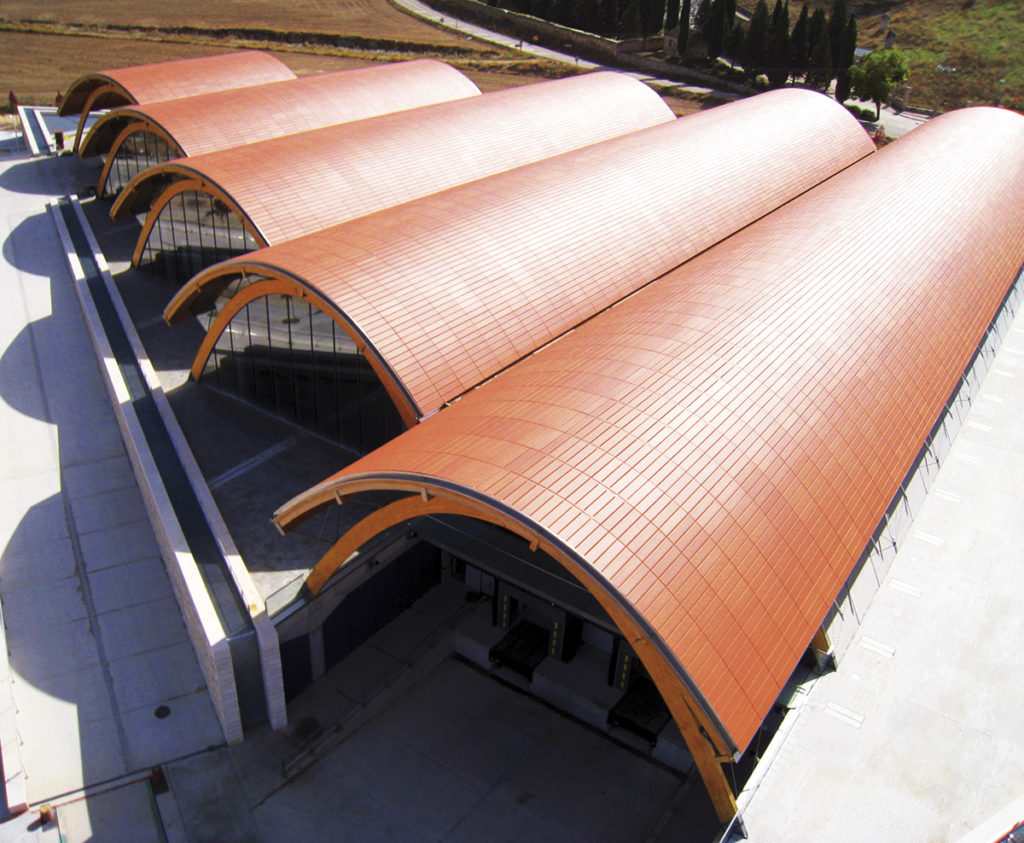 THE ROOF AS AN ELEMENT OF EXPRESSION

The roof is the most noteworthy visual feature of the outside of the winery. This is the result of the exceptional location of the winery at the foot of the Peñafiel Castle. In the project concept, the roof was considered as yet another façade, to be viewed from the privileged position afforded by the Castle.

Therefore, it was designed with these five vaulted bays oriented towards the Castle. In the treatment of the roof materials and construction, using large format terracotta pieces, it represents a contemporary reinterpretation of typical vernacular roofs. In effect, seen from the Castle, Peñafiel offers muted red tones that range from orange to brown, typical of traditional tile roofs. This is the colour that is also used for the winery. 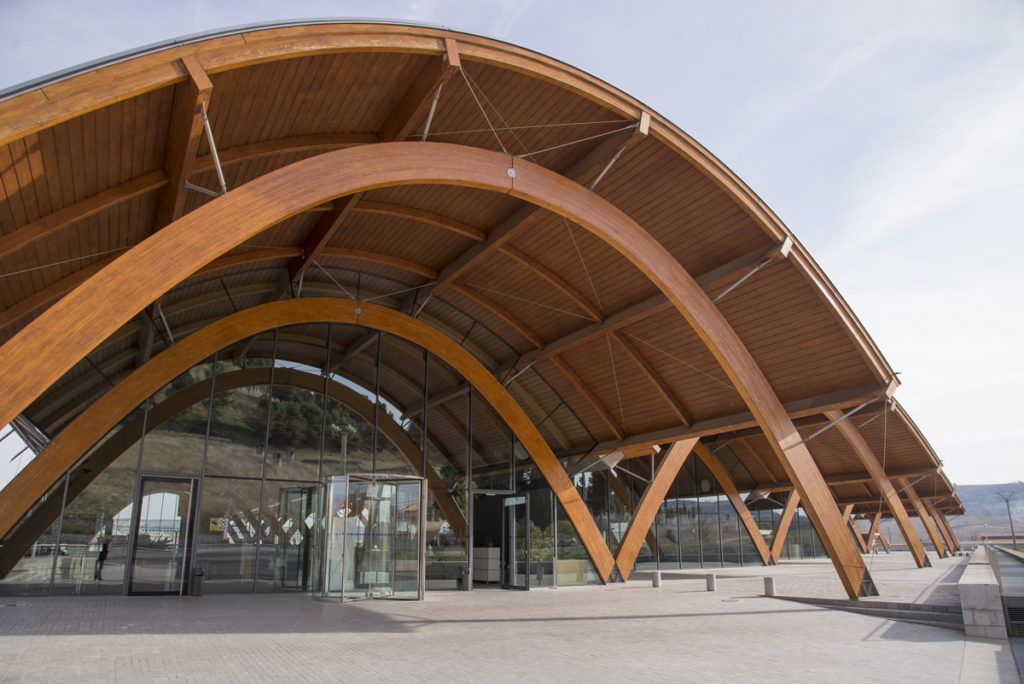 Each of the two elements comprising the building, the base and the light structure, has its own special features, depending on its purpose.

The base is anchored to the ground, smoothing it out to create the support framework for the light structure that rests on its upper horizontal plane. There are two separate planes on the base: the cellar level, which is completely underground, and the production level, partially buried up to a height of 4.5m, at which point an upper surface area is defined, accessible at street level through the main entrance.

On the outside, the base has perimeter walls and stone cladding, to reinforce the idea of a volume anchored to the ground. At the west end of the base, there is a two-level patio garden, around which the spaces open to the public and corporate and administrative office spaces are arranged. This is an intimate patio from which the views of the castle take on extraordinary beauty and power. 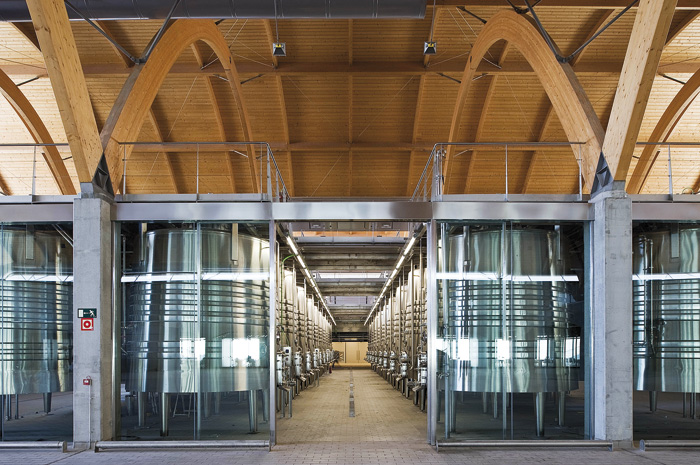 The building design is based on a physical structure, and construction and installation systems that seek to generate optimal conditions for the wine-making process. Within this design, one central element is the attempt to make the best use of the potential offered by the location to create such conditions naturally. Most of the facilities used for wine-making and aging are buried underground.

This structure is made of reinforced concrete, with a construction layout that fosters heat transfer with the ground, reducing the impact of sunlight and extreme climate conditions throughout the seasonal and night/day cycles.

The roof shelters the glass façade surfaces from direct sunlight, which are set back in a 9-meter structural module on the south side, 18 meters on the east and protected by latticework on the west. In turn, the outside of the vaulted roof is protected by a layer of large format hollow-section terracotta tiles floating above the wall plate of the laminated wood boards.

This layer of terracotta tiles absorbs direct sunlight and heat which is spread through a ventilation system to the interior cavities of the piece and the air chamber. Thus any possible loss of heat absorbed by the building structure is minimized. The paving on the exterior surfaces of the production level is based on the same principle.

The heating and cooling systems manage to reduce energy consumption by means of a special energy management system and through the use of water from the subsoil – the remains of the ancient pond – as an integral part of the cooling system.

The base is made of reinforced concrete, partially clad in stone on the exterior.

Wood was used in the main arches of the vaults and the interior of the roof.

Glass was employed in the large vertical enclosure walls.

Almost all of the connections between the structural elements were made of stainless steel joints: the braided cable bracing, the connectors between purlins, at arch bases and all kinds of connectors and structural load transfer components.

Make a reservation to Ribera del Duero most visited winery.