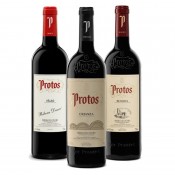 This island in the Pacific, and famous  ex Spanish colony, became the number 94 on the list of exports from the winery.

It’s known  the amazing story of a Japanese soldier who remained hidden on the island for 28 years at the end of World War II.

Bodegas Protos has arrives to Guam, an island in the west of the  United States in the pacific in order to introduce and establish its prestigious wines in its gastronomic culture.

Influence on our culinary tradition, Guam was a Spanish colony until 1898; the cuisine is a blend of Spanish and Filipines recipes. For many, the island of Guam is worthy of the title of gastronomic capital of the Pacific for its complete and varied food.

Guam, tourist paradise is also famous for the amazing story of a Japanese soldier who remained hidden on the island for 28 years, hiding from the US Army when he regained Guam control in 1944. Shoichi Yokoi, the Japanese soldier, built an underground shelter that helped him to be hidden in the forest until it was discovered in 1972. After meeting his anecdotal story, he was brought to Japan where he paid tribute as a national hero.